Continuities » with you wanting me » take a bite, come on, be bold
Dismiss all content warnings

He was abstractly aware that King Beast was abdicating in favor of his teenage son, but he hadn't actually.... expected it to have any impact on his life.

That's maybe a little overstating it but cmon, it wasn't like a new Auradonian king would change things on the Isle that much. They'd still eat Auradon's garbage and it would still be Queenie and Legion and Nat and Nico keeping him safe, not the royalty over in Auradon City who he'd never even see except on the sickeningly wholesome entertainment news channels.

He's so, so grateful his parents don't talk to him.

The royal guard wishes he had a different job.

"Okay, everybody, into the limo," he says. "We have a tight schedule today."

Mackenzie looks intensely grateful to be pulled away.

The limo is more than big enough for four people. And there's food — and Mackenzie grew up on stories of people who offer entire houses made of candy to lure in trusting children, but — it's bright and shiny and it smells like fruit that hasn't gone sour and she takes a handful before she can stop herself.

The candy is sweet.

(They have had black bananas, and rotten fruit, and sugarless gum, but food made from processed sugar never makes it to the Isle.) 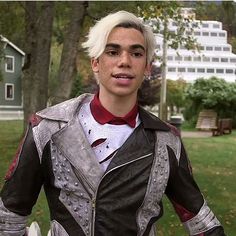 Carlos takes one look at the candy and immediately shoves as much of it as he can into his bag.

Shoving as much candy as you can into your bag is the sin of gluttony.

No, Carlos is right.

"...Please don't fistfight each other over candy," the guard says, "I am going to have to explain this to King Ben, I promise you can all have as much candy as you want once we get to Auradon."

Claudine guiltily reaches out to take a single piece.

He is not at all sure he buys 'as much as you want' but he's happy not to get into any fistfights.

The wages of sin are delicious.

They finish crossing the magic bridge created by the limo and arrive at Auradon City.

Auradon City is brightly colored and clean. Children laugh and play on the streets. No one seems to be fighting, or stealing, or even fucking. The shops are overflowing with food and clothes and electronics they've never seen outside the TV.

The air in Auradon smells different. It's easier to breathe, here; the sunlight is so bright it's a little bit painful.

(He's acutely aware of how different he and the other VKs look from everyone else in this city — Mackenzie with her hair, Carlos with his clothes, him and Claudine just generally dirtier and more ragged. How visible they are, to these people who they have no reason to trust.

He stands near Carlos.)

They get to a building and the four are separated. Sasha is taken to a shower with hot water and soaps that smell lovely, and when he gets out his clothes have been replaced with a soft and brightly colored shirt and pants.

The shower is lovely and he steps out feeling so so much better and soft and brightly colored are good but he is not a fan of having his things messed with.

He can object to the guard who has come to escort him to the next thing, if he wants.

That sounds super pointless and likely to attract the kind of attention he doesn't want. He goes to the next thing quietly and compliantly.

The next thing is a table full of more food than he's ever seen in his life: meats and cheeses and fruits and vegetables and soups and breads and several entire feet of desserts.

...maybe they weren't kidding when they said as much as you want.

He tests the meat very very cautiously, then takes an entire plateful of food — the yellow things are sort of recognizable as bananas if he squints a little, he ignores them and loads up on dessert instead — stores away anything that looks like it'll travel. Maybe they were telling the truth when they said as much as you want but even so.

After he's had enough time to eat a second plate and a third, a guard escorts him to a room where a cheerful woman asks him a bunch of questions.

Can he recognize these letters? Read this sentence? This paragraph? This story? This more complicated story? A news article?

What are some materials that make up the earth? What is the definition of a 'living thing'? How do you do science? What does this chart mean?

Is it wrong to give someone a poison apple in order to become the most beautiful? Wrong to cheat on a test? Wrong for a man to wear a skirt? Wrong to steal a drug in order to save your dying wife?

There are words in the news article he doesn't recognize but he can at least try to sound them out; he has no idea how fractions work but can make a decent stab at algebra; the king is King Beast but it's about to be King Ben and the unification happened a few years before he was born and apparently China has a wall? What's up with that. The earth has iron and what used to be animals in it but that does not mean dirt is edible don't try it, a living thing is a thing that is neither dead nor inanimate, you do science by asking lots of annoying questions and writing down all the answers until people get tired of you, and he can describe the chart but doesn't see the point of it and why can't these people think of better excuses.

He knows full well that they don't want his real answers to the questions about morality so he just answers them all with "yes, that's wrong."

He is escorted to another extremely cheerful lady! The extremely cheerful lady would like to provide some orientation about how Auradon works. If he hurts anybody or takes or damages their things without permission, he will go to jail, which is not nice. If he breaks other laws, he will get an explanation of why it is illegal. You buy things with money; this is how money is used. Charlotte La Bouff lives in New Orleans, Louisiana, which is here. He will have to get there by train; this is how you ride on a train. The major religion in New Orleans is Catholicism; even though they are handing out free bread and wine at the church he should not take it. Magic is illegal and he should not talk to voodoo witch doctors. The food in Louisiana is very spicy; this is how to obtain less spicy food. Louisiana separates black people from white people; he should not to talk to any black people unless Charlotte says it's okay. If he has any complaints about how he's being treated he can call the following number and they'll sort it out.

Does he have any questions?

.....why does New Orleans separate white people from black people? Do they also separate people with black hair from people with brown hair or blonde hair or orange hair or blue hair, or is it just skin they care about? Who is on the other end of that number and what does sort it out mean? How not-nice is not nice? Why do they hand out food if you aren't supposed to take it? Is there other food that looks free but isn't?