He should have had more time. They never moved this quickly, not for him, not for anyone. It must have been blackmail, somehow, or direct intervention of Eru, or some corruption in the ring clouding his thoughts...or any of a thousand other possibilities that are no longer useful for him to consider.

He stands before the court and speaks and begs and weeps. He still has the ring, at least. He prefers not to pull the same trick twice, but it wasn't him who played it last time, so he draws on his power and twists his words in their ears to sound like oaths of repentance.

It doesn't work. They declare that he has gone beyond his station, grown stronger than he has right to be. He no longer fits within the intended story, and must be cast out so he does not corrupt it further. He should have hoped the elves would hear that he committed his only true crime in being helpful to them, but he can't quite bring himself to care. He struggles against his bonds, he twists his shape and burns his jailors, but in their direct presence even his newly forged power is all but helpless.

"I would be honored to assist. What help can I provide?"

“My sister Arya- that’s the younger one- she wants to be a knight. But everyone knows that girls can’t be knights, and I don’t want her to be sad and I don’t want to tell anyone because then they would make her stop practicing archery and stuff, but she’s not very good at being a lady.”

"A tricky problem, to be sure. It is often an issue, when children are not quite who their parents wish them to be. I would council that your sister focus more on learning what she wishes to learn than on avoiding the labels her parents wish to assign. Perhaps a girl cannot be a knight, but if a woman picks up a sword and begins striking down her enemies, who is going to stop her? Men with swords? She will simply strike them down. To destroy your enemies is one of the only skills worth knowing, and just as a knight who can only win with a sword is a poor knight, a lady who can only win with grace and modesty is a poor lady."

"But perhaps more relevantly, in my home it is common for women to fight when needed, and I know of styles of combat which, to a mother, might be deemed similar enough to dancing to be acceptable for a young lady to learn. Perhaps when I return from my trip your sister should ask if I would be willing to teach more of my culture."

Bran thinks for a second, nods agreeably. “Thanks! I’ll tell her!” He scampers down the wall and into the night.

Then Annatar will finish out his evening peacefully, and write up a set of one-time pads, and be ready at breakfast with everything set to go once they've finished eating.

And everything is set to go. Breakfast is hearty and simple as usual. Jon is serious and glum as usual, his wolf is already approaching the size of a full grown retriever. The guards are gathered, horses saddled. There’s a flurry of activity before the little party departs, as all journeys begin with no matter how well packed the journeyers are, and then they are on the long road to the Dreadfort, home of house Bolton.

A fine name for a house! Although Annatar can see why Stark feels they have a bit of a different style. He'll make some smalltalk with Jon on the way, does the boy have anything going on in his life, or is this glumness merely boredom? 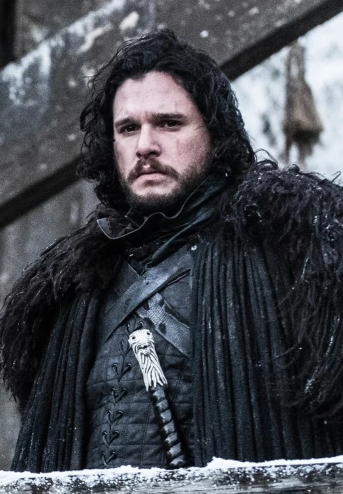 Jon Snow wants nothing more than to be Jon Stark. He doesn’t say it, but he talks around it enough that a three year old child could guess it, and Annatar is MUCH better at reading people than a three year old child. What Jon does say is that he wishes to earn honor, and to make his father proud, but a father can only look upon a bastard with regret and there are no opportunities for a bastard to earn honor outside the Night’s Watch. Jon has been considering joining the Watch, but in doing so would give up his family and any chance to aid them in any southern struggles. This will either be a chance to prove himself, or an assignment to keep him out of the way while the king is visiting. If the former, it is a lot of pressure and he is concerned that he will prove unsuited to the task- to be given a chance and fail is almost worse than never getting a chance at all. If the latter, well, who wouldn’t be upset to be cast aside by their own father for appearance’s sake?

A common problem for children of Men. Though Lord Stark does not seem ashamed of Jon, and Annatar says as much. Stark is uncertain of Jon's place, which is a stressful position, but not one that need hold Jon back from his own goals. So many cultures expect their children to be grown in a decade or two, this is foolhardy. Jon will have more than enough opportunity to learn all the skills needed to make himself useful, and Annatar is happy to help him get there. The first lesson will be one of manipulating dangerous men, ideally followed up by a lesson about leading boring men.

“I have heard that you come from a land far away,” Jon replies, “and I know that other lands hold different traditions than my own, but I still find it difficult to imagine, a culture where a man is not grown by his second decade. By your third, already your parents are aged and failing. Dead by your fourth unless you are very lucky. How would a society even work, if everyone took half their life to be considered grown?”

"That is the difficulty, yes! But men may live longer than they often do. Better food, better medicine, these help greatly, and eighty years is not uncommon. Stranger tricks, like my ring here, can help even further. Live beyond the spans of old age, heal from irrecoverable wounds. It is all a matter of knowledge, and much of this knowledge I have and wish to share. And this would be a fine honor, to help lead your people into longer and healthier lives. We shall see how well the test city works!"

By the way Jon’s face lifts, he is convinced of the importance of the endeavor. By the way his brows furrow, he is concerned he will not live up to it. By the call of the horn on the hills, nearly a full day into the ride, the little party has company.

Unlikely to be friends. A band of perhaps a dozen. Rough looking men wearing tattered ring mail mostly and wielding an assortment of unadorned weapons. They ride large travel-stained horses, and are led by a monster of a man. Head and shoulders taller than anyone he’s met in this land, broad shouldered and generously muscled. He wears dark iron full plate and bears a sword as long as he is tall.

Ah, this might be the one! Annatar turns to his companions.

"Lord Stark mentioned a man named Clegane, known to be of great stature and violence. Is this he?"

That strength would be a useful tool... And surely if any man has abandoned the contracts that protect him from powerful strangers, it is a brigand such as this...

“Ser Gregor Clegane,” Jon says and draws his sword. “I’m sorry Lord Annatar. We shall try to sell our lives as slowly as we may. Take one of the remounts. You may get away.” The half-dozen guards Annatar brought from Winterfell likewise draw their weapons.

He dismounts, and walks towards the band. He shouts at Clegane.

"Greetings! My companions say you are Ser Gregor Clegane, and you come to do us violence!"

Annatar’s companions are stunned into silence. Slowly, shakily, they sheath their blades. The “mountain that rides” canters his horse forward.

“Die on horseback or off, it makes no difference to me,” he laughs. “I am Gregor. Which of Stark’s ‘little wolves’ am I killing?”

"Too hasty, Gregor! I would fight you! Will you face me alone, or must I deal with your men as well?"

Ser Clegane laughs and dismounts. “Aye, I will fight you little man. Do you need one of my men’s swords as well or do you think your tiny fists will dent my armor?”

"No need to worry! I am prepared."

As he walks forward, he draws from within his robes a knife. It is excessively beautiful in the style of elves, but clearly more a tool than a weapon of war. It's silver blade, however, shines very, very bright.

Gregor does not wait on further ceremony, and swings his huge sword in a wide flashing horizontal arc.

Annatar dodges the first strike, slipping past the Mountain and experimentally pushing at the man, trying to unbalance him in the wide swing. Gregor swats at him and he ducks low, jamming his knife between two plates of armor and twisting, a satisfying snap tears a plate free as he leaps back, regaining distance. Gregor charges forward, and Annatar catches him, grabs his shoulder and pulls himself over the man's head, out of the way of his sword, lodging his knife in the shoulder as a handhold. Annatar throws his weight backwards, but even with the knife as a lever he can't get him to the ground. He contents himself with another attempted trip, then dodging a kick, a few more jabs between the plates of armor. Barely flesh wounds, but even a man this large has a finite amount of blood. He pulls away again, out of the way of another swing of the enormous sword, dancing back until Clegane charges again, this time to block the strike directly. He blocks with the edge of his knife, a great crack as Annatar imposes his will upon the metal, and the combined magic and mithril cleave the last two feet from Gregor's sword.

There is a moment of stunned silence. Ser Gregor stares for a moment at his sundered sword, then casts it contemptuously aside. He steps in, faster than a man his size has any right to move, sweeps Annatar into the parody of a hug, and starts crushing. “You’re fast, little man,” rumbles the Mountain That Rides. “I’ll take that little knife and trim those pointy ears with it! I’ll crush your bones and use your corpse as a rag to wipe my shit with!”

If Gregor Clegane were a more attentive man, he might notice how Annatar is not crushing nearly as well as the average human being. As it is, all he manages to notice is the fire, deep within Annatar's dark eyes, flickering, growing, raging and roaring and consuming, crackling around his thoughts, rushing through his mind until the only thing he can think is burning, burning deep within his soul.

The body known as Ser Gregor Clegane stumbles backward, and falls to the ground, and Annatar looks up at himself from a second pair of eyes.