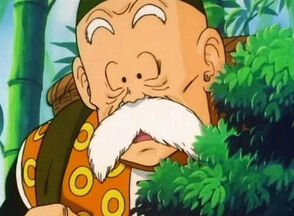 When Son Gohan had headed off the meteorite's landing site, it had been solely with the intent to prevent any fires from spreading, since in a season as dry as this such a blaze could easily be devastating to the forest. Once he arrived at the new clearing, however, and his fears proved unfounded, he was left with a mystery. The crater was significant, but not nearly large enough for an object the size of the one at the crater's center, and there were no signs of it having rolled in. What's more, as the dust began to settle, it was clear that this meteorite was far too round to be anything natural...

...Huh. It's not the weirdest thing Gohan has seen, not by a fair margin, but it is pretty high up there. Kakarot didn't seem to be conscious in there; the boy wouldn't try and hurt him, and certainly wouldn't have kept hurting himself trying to get up after it clearly wouldn't work. He takes the boy home, tucks him into bed, and stays up late into the morning trying to figure out what could have triggered the transformation. He's tired, so it takes him longer than it should, but eventually he makes the connection with the full moon. The fact that this is the first time it happened isn't a coincidence; bei ng inside seems to prevent it, as might simply not looking. He realizes how early it is, turns in himself, and when he wakes up the next morning marks the dates on the calendar  he has a very serious chat with Kakarot instructing him not to go out during the full moon.

“Okay mister Gohan.” Kakarot does as he is told by grandpa Gohan, trusting he has a reason for telling him that. When he goes outside during the day he sees the ripped up trees and giant footprints and assumes it’s because a monster comes around during the full moon.

Kakarot respects granpa Gohan alot because of how strong and wise he is, to Kakarot any knowledge at all of the world outside Mount Paozu means Gohan must be very wise.

Kakarot spends his days living with Gohan and growing bigger and stronger and getting little lessons in martial arts from Gohan. (Who is actually a master in turtle style.) and then around the time he turns 10 years old he asks where he came from. He knew Gohan wasnt his father or real grandpa, he didnt have a tail like Kakarot did.

"You have to be careful with assumptions, Kakarot. Children are often quite different from their parents, and very much so from their grandparents. In this case, though, you are absolutely correct." He smiles at Kakarot; it's a bit bittersweet, this moment, but he's still quite proud and he knows the truth doesn't change the years the've spent together, where Gohan has come to care about the young boy as if he were his own."You came here on a spaceship, from somewhere out among the stars. I don't know where, precisely, or who your parents were, but they were the ones who named you! If it had been me doing it, I probably would have picked something silly, like Goku."

“It’s shorter and easier to say I guess, I’m not an earthling? Can I see the spaceship?” This was a bit of a shock but also really exciting to learn, bouncing up and down on the balls of his feet. “How do you know my name was Kakarot if you didnt know my parents?”

"Certainly you can. I moved it away from the crash zone, in case someone came looking for the meteorite crater, but it's still nearby. As for the name, well, they left a message. It played when the pod opened, but I couldn't get it to play again despite repeating the process. There might be a way to make it play again, mind you, but I don't know much about machines and didn't want to damage it."

It's a few miles hike to where the pod is stashed, but that's hardly worth noting for either of them.

Kakarot spends a long time looking at the pod before coming close to it, then starting to poke it all over just in case that does something. Eventually he sits in the pod and a message starts to play and there is a screen on the inside of the pod showing video of the message.

A man with black hair a lot like Kakarots and a scar on his cheek is standing off to the side as a woman peers into the pod. The man speaks.

“I’ve programmed this to head to a distant planet called earth. The people on that world have low power levels and aren’t technologically advanced. I think he will be able to do well there Gine. Good thing is its not an extremely valuable world so im hoping it wont even show up on the frieza forces radar.”

Then the woman presumably Gine starts to talk into the camera. ”If your father is wrong about this then we’ll come and get you immediatly.”

Then the man leans in over his probably wife. “Listen son, you do what it takes to survive got it?.” “We will see you really soon.” Says Gine as they crowd around the pod, obviously emotional about sending their son away.

“Goodbye” comes from Kakarots father as the pod starts to lift off. “Dont forget us Kakarot!” Yells his mother as the recording ends.

Kakarot starts crying seeing his parents message, He forgot them and his mother told him not to. How could he forget his own parents?.