This post has the following content warnings:
Oct 26, 2020 2:17 AM
a seven nation army couldn't hold me back

In the grim cyberpunk world of the 22nd century real life sucks. So people use neural nano-interfaces to escape to the vibrant fantasy worlds of DMMO-RPGs. For years the most popular of these was YGGDRASIL, but it slowly lost momentum and by 2138 is being shut down. Three friends log in to face the last minutes of the game together, completely unaware of what will happen after it ends. 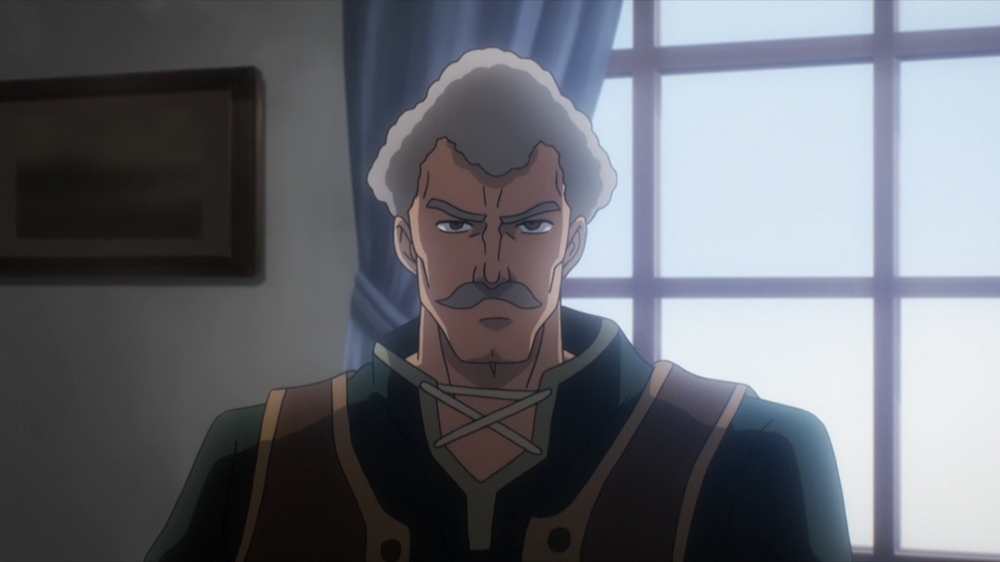 Pluton introduced an extremely thin and neurotic-looking man wearing a robe as Theo Rakheshir, guildmaster.  Theo is accompanied by a human mass of bloated, fatty oil, who is apparently the mayor.

Takeko will go through pleasantries, and produce the items and fragments when prompted.

The crown is too thoroughly destroyed for Theo to directly do anything with it.  However, the description and name match a treasure thought to be in possession of the Theocracy.  He confirms that all of the other garb is pointless junk that the cultists just ascribe religious significance to.  He seems rather annoyed that he isn't getting a proper chance to play with it, but confirms that there is no known way to reverse the brain damage if it is removed from a person intact.

He's also quite excited to show you what they got off of creepy dude.

Theo raises the orb in his hand. It's a fairly rough-looking gem that gleams like a lump of blackened steel. Yet it hasn't been polished and it looks more like a lump of ore than anything manufactured. Everyone can sense something like a heartbeat coming from the Orb.

Theo praises the power of the "Orb of Death" in an honestly kinda creepy manner.  Apparently, it can cast a large number of necromantic spells and grant related meta-magic.  Its incredibly impressive by local standards.  To a level 100 player it is rather less impressive, but sounds like it could still be useful for having access to a large chunk of mid-tier necromancy without having use up spell slots.

She's not too huge on the necromantic aesthetic. Still, she'll offer to help with securing it so no one else gets their hands on it (and make enough of a study of it she should be able to scry it later).

At her level just getting a clear view of it should be enough to let her scry it, but given how things seem slightly different here it makes sense to take a closer look.  Theo is open to her adding more spells to the vault it will be kept in, but is reluctant to let it leave his hands till the vault is ready. Speaking of scrying the vault already has paranoid anti-scry protection.  Obviously a level 100 with the right set of spells can break through anything local.  But given that scrying favors the defender it is still a pain to deal with, particularly if they want to keep the protections intact and avoid anyone noticing their scrying.

Her main concern is if it leaves the vault, or someone suspicious enters that vault.

She should at least be able to hurry along production...

The vault is already created he's just waiting for his underlings to finish checking that none of their other major magic items have special containment procedures that would preclude sharing a vault with the orb.  Still if she wants to add some extra spells, and doesn't mind Theo watching to confirm the spell's effects they'll take the extra security.

After a bit more talking Takeko, and her assistant (a disguised Soreiyu) are taken to the vault.

They're not going to waste ridiculous amounts of magic on this, but the vault will be very, very thoroughly protected from everything at the local level, and at a minimum annoying for people at Soreiyu's level.

With that out of the way Theo reluctantly puts the stone in.

Once everything's sealed up, he'll raise the possibility of resurrecting (or, making Kuchinawa resurrect) some of the people who got turned into zombies at the start.

After a rather drawn out magician's guild group huddle they decide that this will probably just result in them being raised as intact undead, but are willing to give it a go if he'll take responsibility for re-killing anyone that happens to.  They also hunt down the body of a guard captain who was infected by a contagious undead, and was strong enough in life to potentially survive resurrection.

Kuchinawa doesn't want to bother with any items on this, so instead they recruit one of the NPCs he'd made as a divine caster - if that fails, he'll pull out a wand. Plus, this reduces the risk of that team recognizing Soreiyu or Kuchinawa, since they don't have to be in the room...

She's able to heal the guard captain, no problem. He's weaker than before, but very alive.  She hypothesizes that this will only work on people who were went straight from alive to undead.  Based on using [Life Essence] she belives that the people in this world are weak enough that only the highest tier of resurrection will work for most of them, and even that might not suffice for everyone.  However, she is quite eager to experiment if Kuchinawa desires.

He'll authorize the experiment - while Takeko's on hand to put down any failures.

Trying to resurrect a random zombie fails, Tsunade puts it down her self.  After all, she is a divine caster, and its level is practically nothing.

Of the handful of casualties of the horde, none rise as undead but only around half come back at all.  Some crumble into dust, indicating that they couldn't handle the drain from even relatively gentle resurrection spells.  Others are completely unaffected, which theoretically means that their spirt did not consent to leaving the afterlife.  Though the actual evidence for this theory seems a bit vague.

He wants her to try bringing back the adventuring team, too. (He won't be in the area, though Takeko still will).

She's game to give it a go, but will mention that they will likely come back as zombies if Clementine isn't killed first.

The magicians will collectively back her up on this point.  They'll also mention that Clementine is on the fast track to the gallows, but has to be brought before a magistrate to be officially condemned first.  The kingdom almost sorta has rule of law after all.  Also, she's probably being thoroughly interrogated.   Zurrernorn was already a considered a terrorist organization before today.  It only avoided law enforcement attention due to not being very active and not giving any good leads to investigators.  So now that they've captured someone who played a major role in nearly destroying a city its only natural they'll want to pump her for everything she's got.

He'll check with Tsunade if delaying the resurrection will change anything, but is fine letting there be a gap.

As long as the bodies are still basically intact its fine.  If they can be put on ice that would be nice, but its not really needed.

Soreiyu has a utility spell for that, like for most things. It's lower level, but it'll keep things preserved for ten days.