The ring comes to her without any accompanying disaster, at first. It comes when she's on her way home from work (she hasn't been to school in weeks), following her along and giving off a distinct sense of importance, if not urgency. Karen's not an expert on alien military tech, but she knows weird stuff when she sees it, and she's pretty sure that she's not the sort of person who should be called on to field weird stuff. Like, there's her niece, her niece is pretty weird, but that doesn't mean she's someone who can stand up to an all-out weirdness free-for-all.

"Go home," she tells the ring. "Or - maybe not home, if it's far away, but you can fly places, right? You should go talk to the Justice League in DC. Or, uh, float up to them and let them do the talking, as the case may be."

The ring gives no sign that it intends to go anywhere else. She sighs and puts it in her pocket; she doesn't put it on. She can mail it to the Justice League with an attached letter in a couple days, when she has the energy to do stuff like mail letters to people.

As it turns out, she doesn't get to mail the ring in a couple days. Azalea does another something in her room, something with latin chanting and weird ominous lights coming out from under her door, and someone somewhere is tipped off to the presence of something other-than-human in their house.

She'll take him to the backyard, and then ring, costume, skyward.

On the way to Nevada, he teaches her how to safely fly at high altitude and at speeds up to Mach 10, along with how to navigate the US from the air. And also how to do loop-the-loops without throwing up, because what's the point of being able to fly if you can't have fun with it?

This is such an important thing to know! She focuses pretty well on it despite also being pretty nervous about things.

And in a ridiculously short time, they are landing at the secret Justice League training facility in the Nevada desert.

Karen is introduced to the security system and given the designation Green Lantern B-05.

"The B-series is used for sidekicks," her mentor explains. "B-01 is Robin, but I can't remember which order the other three go in."

She has a DESIGNATION. She is an OFFICIAL SUPERHERO. Or maybe an official sidekick. That's OK, because you can graduate to a full hero and if you're a full hero then probably people sometimes intentionally try to assassinate you. So you had better not become one before you've figured out how to deal with that.

She's an official something, anyway. She has a profile on the League's computer system and everything. By the end of the day, it includes records of the initial training session and a tentative schedule for future sessions.

The next morning, there's a letter for Karen. When she opens it, it contains her official League affiliate card and an invoice informing her that the first instalment of her stipend has been paid. It names the amount.

- do superheroes get paid? She kind of wants to google that but she's pretty sure the Justice League wouldn't have publicly available salary information. She supposes that you would have to pay, like, Superman, right, he probably doesn't pay rent on his Fortress of Solitude but he still has to, like, buy sandwiches somewhere, right?

She calculates and recalculates their household expenses - she's kind of been the one keeping track of most of them for a while - and decides that yes, this is enough, this is enough even if something happens and Azalea can't keep working. She tells the supermarket that her scheduling change was a mistake and that also she needs to give them her two-week notice. Keeps the library job, the library is good for her.

She goes back to school. She has no idea what's going on in most of her classes. The English and chemistry teachers negotiate deals with her; the trigonometry and world history teachers inform her that she's going to fail their classes no matter what and should probably consider summer school or something.

Training sessions continue to happen regularly over the next three months, mostly with Lantern Stewart although Lantern Jordan helps when he's available. Karen learns how to make more and more complex projections, how to pick what will be the most useful in an emergency, and even goes on patrol with one of the Lanterns a time or two, helping deal with minor supervillains barely worthy of the name.

In early July, Hal invites her to come and meet the other League sidekicks at the Hall of Justice.

She will totally come meet the other sidekicks. She's slightly nervous about it, because they're going to be a bunch of people who are both younger than her and probably also more experienced and more competent, but everyone has to start somewhere and she is starting here.

They've arranged to meet up at the Hall of Justice on the afternoon of July 4th. When the day arrives, the three Green Lanterns are the first ones there, the other mentor-sidekick pairs having been delayed by supervillain activity. Batman and Robin show up next, followed by Green Arrow and Speedy, then Aquaman and Aqualad, who were all the way out at Pearl Harbor.

Batman puts a hand on Robin's shoulder as they stand outside the Hall, waiting for Flash and his sidekick to join them. There's an almost parental expression on his face—or at least the part of it that can be seen under the cowl.

"Welcome to the Hall of Justice," Green Arrow tells the assembled sidekicks, who all look awed by the massive building. It's clearly designed for precisely that impression, looking almost more like a monument than a functional building. 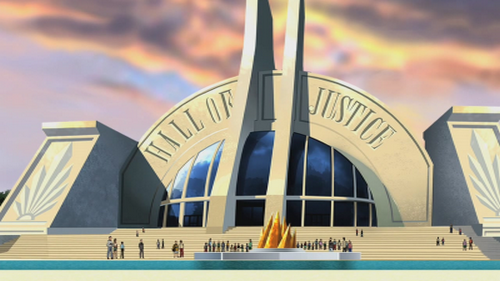 There are a lot of monuments in DC, so it kind of fits with everything else! (She hasn't actually walked around DC ever. She's flown there for reasons once or twice in the past couple months, but she's been kind of busy and hasn't quite gotten the chance to make full use of her newfound mobility.)

She smiles up at the building and sort of faintly wonders what sorts of relationships the other sidekicks have with their mentors.

"Oh, man!" A voice from behind has them all turning in time to see Flash and Kid Flash skid to a halt. "I knew we'd be the last ones here!"

Kid Flash is dressed in a costume that's almost the reverse of his mentor's: primarily yellow, with red details including the red lightning bolt on his chest. Right now, he's glaring at Flash, who just grins sheepishly.

"Glad we're all here," Aqualad says to the other kids as Batman herds them towards the main entrance. He isn't wearing a mask and looks about the same age as Karen, maybe a little younger.

"Yeah!" She hopes her voice sounds cheerful because it's pretty much the only thing she has to emote with, thanks to her ring's initial observation that she didn't want random people looking at her face while in lantern mode.

She waves at Kid Flash and then follows the others into the building.

Kid Flash falls into step with the rest of them, almost vibrating with excitement.

"Have all five sidekicks ever been in the same place at the same time before?" he asks rhetorically.

"Don't call us sidekicks," Speedy snaps. "Not after today."

He pushes ahead of the group and strides into the building, using his height and long legs to gain distance from the others. The bright red-and-yellow costume looks a little childish, and he's wearing a domino mask like Green Arrow, but judging by his voice and height he seems a year or so older than Karen and Aqualad.

"Sorry," Kid Flash says to Speedy's retreating back. He looks at the others and adds, "First time at the Hall, I'm a little overwhelmed."

"I'm definitely a sidekick," she says, shrugging at Kid Flash, even though come to think of it she thinks the ring maybe gives her a pretty good claim to full superhero if she wanted to take it up on the offer. Which she doesn't right now. Besides, she feels like it would be kind of childish to worry about what she was called and not what she does for the world, though this doesn't seem like a good time to say that.

They definitely haven't all been in the same place before; Karen hasn't met any of them, though she doesn't feel like now is a good time to point that out, either.

They pass through the doors and into the entrance hall, where massive bronze statues of the seven founders tower over their heads. Superman stands proud in the centre, flanked by Batman and Wonder Woman. On either side are statues of the other four founders: Aquaman, Flash, Martian Manhunter, and a Green Lantern that Karen will recognise as Hal.

It's.... about as impressive as the rest of DC. Which isn't unimpressive, but she's learned that her government really likes its monuments, so hey, the league is on-theme.

She politely stares at the statues for a bit and then looks around to see whether there's anything else interesting here.

With cameras flashing all around them, the mentors lead their sidekicks directly towards a door marked "AUTHORIZED PERSONNEL ONLY". It whooshes open as they approach, revealing Martian Manhunter and Red Tornado waiting for them.

Martian Manhunter steps forward to welcome the group. "Robin. Speedy. Aqualad. Kid Flash. And our newest Green Lantern. Welcome." He turns to lead them further into the building. "You now have unlimited access to the gym, our fully-stocked galley, and of course...our library."

The library is a large room with bookshelves lining the walls, interspersed with computer terminals at regular intervals. In the centre, a variety of soft-looking armchairs are scattered around a couple of tables.

"Make yourselves at home," Flash says with a grin, spreading his arms to indicate the whole room.

Kid Flash has his feet up on one of the tables before his mentor has even finished the sentence. Robin and Aqualad aren't far behind, picking out chairs and making themselves comfortable.

She hovers about a foot off the ground and wanders around various bookshelves trying to get a good idea of the selection. She should probably talk to the other sidekicks or something but that sounds hard.