Continuities » Sandboxes » children of his thought
Dismiss all content warnings

There were thousands of presences and the screaming arc of history stretching forward.

Meanwhile, he has managed to piece together enough of what happened to guess what caused baðil's reaction.

He sends -- targeting correctly this time -- that he's here, that they got away (and the concrete details of how), that he's himself and cannot be made into something other than that, that...

baðil knows mostly of that already, of course. But it helps.

So when Peace-Which-Passeth-Understanding arrives and speaks, he doesn't react or respond -- he's too focused on baðil.

He -- probably does need some kind of help, honestly, but he's not looking into those parts of himself to know what. It wouldn't end prettily.

Besides. He's not about to make himself that vulnerable to a complete stranger. He's already disarmed himself badly enough, rejecting the greater part of his contacts.

On the other hand, Peace-Which-Passeth-Understanding obviously wants to help; and he's apparently the brother of someone very powerful; and One-Who-Sings did just cast off most of his contacts.

Okay; those two have something going, and it's not obviously some kind of mutually-destructive codependent spiral. He'll err on the side of not interfering, especially while there's people who can be more straightforwardly helped.

{Right now,} he says to One-Who-Sings, {why don't you come with me. There will be plenty of time to start on finding a new path towards new goals. But for now you can just come with me to the river, okay?}

He keeps an eye on the other two, meanwhile, in case there's any clues as to what they need most.

aþaški is -- not okay, he's not even pretending to be, but he got away and maybe, maybe, maybe

(but what if they can't fix this, what then?)

aþaški is right there, doing his best to reassure him through his own distress, but he can't stop thinking about how -- how damaged things are, they are; how he can't see how to put all the broken pieces back together; how he nearly lost aþaški, and he didn't, he's there but what happens next time?

aþaški is there, and that helps a great deal, but Guards-The-Gates is still very much afraid of the future.

He lets Peace-Which-Passeth-Understanding lead him over to the river, a little way downstream from Wears-Away-Mountains, to a little pool where the flow of the water slows until its surface is almost a mirror.

Apparently the Maia wants him to help with -- something about reflections. He says something agreeable and puts up with his host fluttering around for another little while until it's been sufficiently established that he's perfectly fine.

He touches the water and watches the reflections shatter.

Peace-Which-Passeth-Understanding returns to Wears-Away-Mountains, satisfied that there are at least no incipient disasters anywhere else within his sphere of influence.

Wears-Away-Mountains is definitely relieved when he returns.

Not far away, Guards-The-Gates has stabilized to something -- not very good, if better than before.

When Peace-Which-Passeth-Understanding nears, Seeks-Better-Paths looks over at him and sends to him, intensely (but not in the tones of someone who expects a positive response). {Guards-The-Gates needs help. You are on good terms with him can you -- please --}

That is not something he could ever say no to.

He bounces an echoed impression of the cry for help to Wears-Away-Mountains, as explanation, along with a sense of apology and a promise to return again.

{Of course,} he send Seeks-Better-Paths, with a touch of horror at the notion that anyone would ever need to beg him for help. (There are actually a lot of things about that message that make him want to go help Seeks-Better-Paths and reassure him, but he respects someone asking for help for a friend before themselves, he's not going to deny Seeks-Better-Paths the right to make that sacrifice.)

He moves closer to Guards-The-Gates, though not so close as Seeks-Better-Paths is -- he doesn't want to set off an instinctive radar for threats. {You're safe,} he sends, directed at Guards-The-Gates but including both of them. {You're among friends, in a safe place. Seeks-Better-Paths is here, and he's safe too. One-Who-Sings is here and safe. Wears-Away-Mountains is here and safe.} Simple concepts that he can send with complete honest confidence in a calming rhythm. {If you can tell me what you need, I will do that, or I can make my best guess. Or -- if you prefer, I can leave you alone.}

Well. That does appear to help, some, although he reacts with... guilt? to the mention of One-Who-Sings.

He doesn't seem to be able to express what he needs (or doesn't want to, for some reason?), but clearly has no desire for Peace-Which-Passeth-Understanding to leave.

{Thank you,} he sends to Peace-Which-Passeth-Understanding (and there's relief and a complicated morass of other emotions beneath that in the message.)

And then he focuses on Guards-The-Gates completely again.

(Wears-Away-Mountains shudders, but that makes sense, it's important -- {okay,} she sends)

aaaaah he is needed urgently in two places at once

He reaches out across the distance for his sister -- {love, need you} -- and adds an impression of the situation, fast and jumbled but she'll be able to decipher it fine. Then he, too, refocuses on Guards-The-Gates.

{I am going to make sure your friends are okay,} he sends, {let me do that, I have the strength for it right now, allow me the privilege. Put it down for a little while, if you can trust me enough to do that, give yourself room to find your own peace. This is a place and a time where you can do that. This place is mine and I know its safety like I know my own mind.}

But it's not okay, nothing is okay (maybe it's safe here? maybe. it doesn't help very much), and he doesn't know how to fix it, and he needs to fix it, that's what he's for and

and aþaški is hurting and

He stops broadcasting abruptly and completely.

oh no oh no

{let me help you, it's going to be okay, I know it's bad but it's getting better not worse,} he sends to Guards-The-Gates, and to Seeks-Better-Paths: {I don't know what he needs, I'm flying blind, can you help...?} 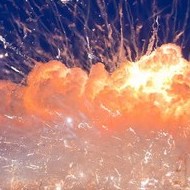 Meanwhile, someone else arrives near Wears-Away-Mountains, answering her brother's call.

{Hi,} she says, warmly. {You okay? I'm gonna look out for you until my brother can make it back, OK?}

Seeks-Better-Paths is... not exactly in a state to answer.

(And then he gives up and sends, more tightly focused -- how much he cares about aþaški and how he wants him to be okay and doesn't want to hurt him especially when he's already hurting and doesn't know how.)

...Seeks-Better-Paths is just going to cling to him and shake.

He doesn't know how to fix this, but he can be here for both of them and send them as much comfort as he can and murmur reassuring things -- {you are both going to be okay, you have done so much good, you make each other stronger, I see you hurting but your love is good even when it hurts, it is good you love each other, it is going to help everything be okay, everything will be okay...} 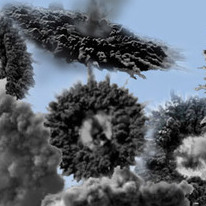 {Sorry, didn't mean to startle you,} she says to Wears-Away-Mountains, misinterpreting her reaction, {it's just me. Sorry. You must still be jumpy from earlier, I know I would be. Was, until I went and got it out of my system. How're you holding up?}

That seems to help; even if Seeks-Better-Paths doesn't seem to believe him that things will be okay (or, at least, he reacts differently to those than the others), it seems to significantly help Guards-The-Gates.

The reassurance that it is Instructs-The-Ignorant doesn't seem to have helped very much.

Calmer is good. If he can help even one of them it'll help the other. Little bit at a time. He's patient.